When a guitar is in standard tuning the open strings are tuned from the first string (thinnest) to the sixth (thickest) to:

Or, from the thickest string to the thinnest:

There are various methods used to tune the guitar.

For this method assume that the sixth string (thickest) is in tune. 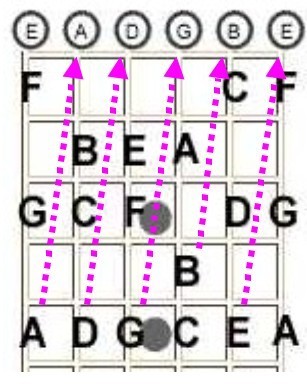 The note at the 5th. fret on this string is ‘A’. This is the note that the fifth string should be tuned to.

The note at the 5th. fret on this string is ‘D’. This is the note that the fourth string should be tuned to.

Once the fourth string is in tune the note at its fifth fret is ‘G’. This is the note that the third string should be tuned to.

When the third string is in tune, the note at its fourth fret is ‘B’. The second string should be adjusted to match this note.

Finally, the first string should be tuned to the ‘E’ found at the fifth fret on the second string.

Other tuning methods are:

Refer to another instrument.

Ensure the other instrument is in tune and that you know where to find the correct notes / pitch on that instrument.

Use a digital / electronic guitar tuner.

Digital tuners are very useful and accurate. However, they are not always easy to use. They are particularly useful when plugged into an electric guitar because they cut-out superfluous sounds.
After using a digital tuner it’s a good idea to check that the guitar is in tune with itself by using relative tuning.

1-2-1 tuition online Lessons are live and individually designed to meet your needs. You can learn for fun or study towards your grades and career as … END_OF_DOCUMENT_TOKEN_TO_BE_REPLACED

Give the gift of music … END_OF_DOCUMENT_TOKEN_TO_BE_REPLACED