The steady pulse of the beat runs through most pieces of music and can most easily be heard by listening to the drums.

The speed or tempo of the pulse usually remains constant. This is the beat we clap.

These even beats are divided into sections or bars (measures). In Common Time (4/4) each bar has four even beats. A strong accent on the first beat of each bar can help to identify the start of each group of four beats.

When playing either lead or rhythm guitar we are working with the beat to create rhythms in melodies or with chords. Rhythm combines sound and silence that dances across the pulse, it doesn’t necessarily sit on each beat.

When playing a chord we can sit on the beat by playing four even strums per bar, or more interestingly we can create rhythms by using sound and silence.

For example, we can combine single beats to create sounds of longer duration. For example, you could allow a chord to sound for the duration of two, three or four beats.

Each beat can also be divided into smaller parts, such as halves or quarters.

All of these time durations have their equivalent value as rests. This is where you decide not to strum. For example, you could rest on beats one and two and strum on beats three and four.

However you decide to extend or divide the beats, these must combine to be a total of four beats per bar. So the total duration of strums and rests combine to four beats. For example, the first strum may last for two beats, you might then divide the third beat into two halves and rest on the fourth beat. This adds up to a total of for beats.

Various symbols are used to show note and rest duration. Here are just a few; 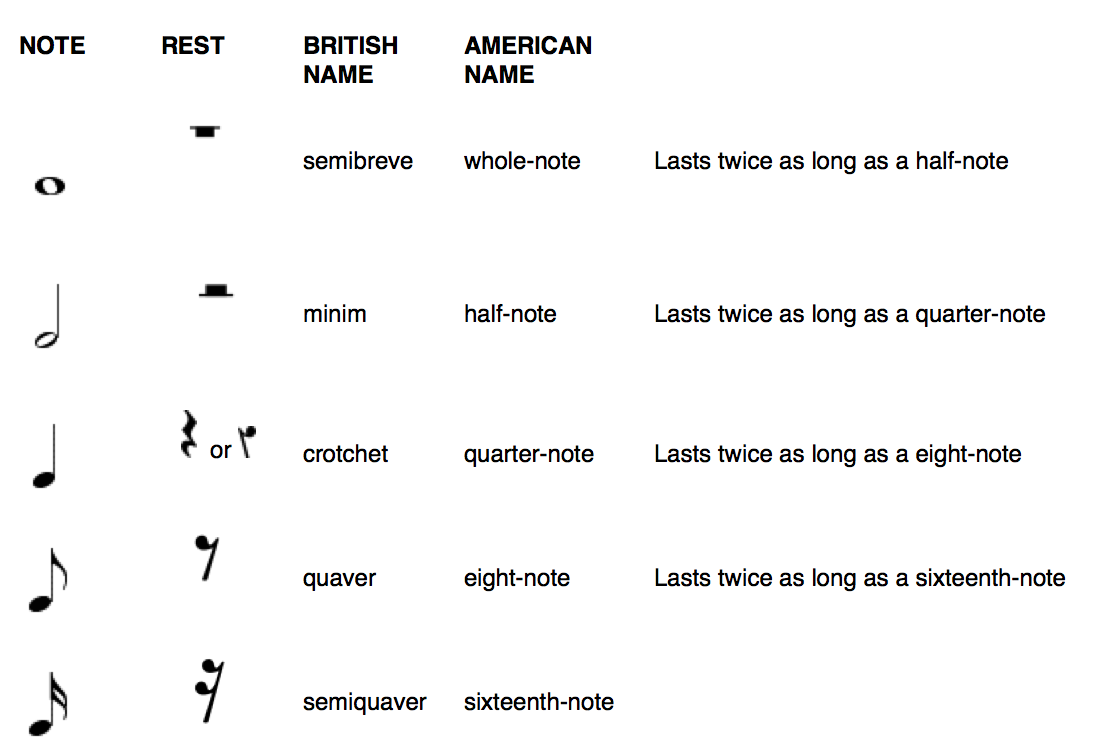 The examples below all show one bar of four beats.

The arrows indicate the direction when strumming.

This diagram shows a semibreve (whole-note). The duration of this note is for the entire four beats of the bar.

Here the bar is split into two. Each minim (half-note) lasts for two beats.

Next, the bar is split into four crotchets (quarter-notes).

Now the crotchets are split into half and there are eight quavers (eight-notes).

Each beat is now split into quarters with semiquavers (sixteenth-notes).

For both rhythm and lead guitar playing it’s essential to play in time. Use a metronome or drum loop to maintain an even beat. Set the tempo (speed) of the beat to a comfortable rate. Even before you pick up your guitar make sure you  listen to the beat, tap your foot, clap your hands and move to the groove.

1-2-1 tuition online Lessons are live and individually designed to meet your needs. You can learn for fun or study towards your grades and career as … END_OF_DOCUMENT_TOKEN_TO_BE_REPLACED

Give the gift of music … END_OF_DOCUMENT_TOKEN_TO_BE_REPLACED