This piece will help you to develop coordination between both hands by combining chords, individual string picking and strumming. 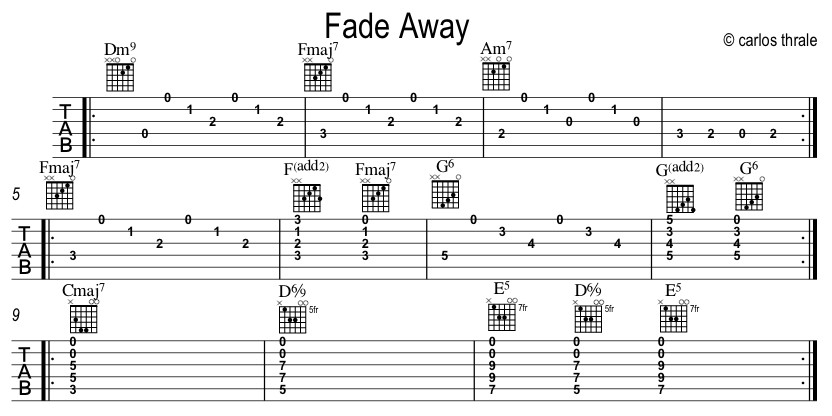 The strings can be sounded by either using a plectrum of finger-style.

When using finger-style use the

thumb to pick the 4th string,

middle finger to pick the 2nd string and

The order in which the strings are picked is repeated in the first three bars.
Emphasise the fourth string each time it is played. This is the bass line.

BAR 4
This is a melody played on the fourth string. It is a continuation of the bass line.

BAR 5
This chord shape is a repeat of the second bar. The string picking is the same.

BAR 6
Add your fourth finger to the previous chord at the third fret of the first string. Then strum the chord downwards from the fourth string.

Now, remove your fourth finger and strum the chord again.

BAR 7 – 8
This is a repeat of the previous two bars with the chord shapes moved up two frets.

BAR 9 –11
These bars use a ‘power chord’ shape that moves up the fretboard.
Do not play the sixth string.

In the recording bars nine to eleven are repeated four times. During the last two repeats harmonics are added to the first bar at the seventh fret and to the second bar at the twelfth fret.

1-2-1 tuition online Lessons are live and individually designed to meet your needs. You can learn for fun or study towards your grades and career as … END_OF_DOCUMENT_TOKEN_TO_BE_REPLACED

Give the gift of music … END_OF_DOCUMENT_TOKEN_TO_BE_REPLACED